Kids think about magic most of the time. Toddlers are thought to live in a world of their own, a world in which fantasy and reality are undifferentiated. In their mind trees can talk, pigs dance salsa, the favourite train flies, cucumbers, carots and tomatos are a musical band, magicians come by night and dreams come true. Magical object can be seen and found everywhere.

Today Bobi came upon wind driven whirligigs and though they were “magic wand”:

-Look, Krisi, a magic wand! Its wings are spinning and also looks like a flower! They are so many! Like 15? Can they fly?
-Bobi, that is not a magic wand! It is called a whirligig and is so fun! The whirligigs are wind driven! You can take it and run around with it and watch

as the whirligig  spins wildly with wind velocity! Or – just put it outside in the garden and watch its wings dance in the sweet little breeze! Like the weathercocks in mummy’s painting!

-But Harry Potter has the same! And he calsl it a magic wand. I saw it on TV!

-Oh, Bobi..you don’t understand, because you are little…Harry Potter is a magician and can fly, like Batman. That’s why his wand is magical. 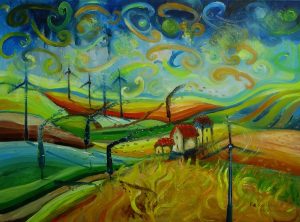